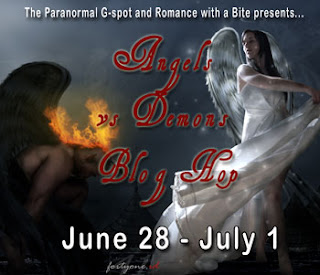 First I want to thank the Paranormal G-spot and Romance with a Bite for hosting such an awesome bloghop.

I think that in the world of the paranormal, angels and demons intrigue most of us. Their origins can be traced to many different cultures, and the history is not always the same.

Such is the case with novels, each author puts a new spin on things. There are so many to list. Though I do enjoy both, demons rank a little higher, I think that is due to the fact that I have loved horror since I was a little girl. Though add an angel in the mix and it's perfect. You don't want me to rattle on do you? No I'll just get right to the giveaway.

For those who have been with me for the past 4 months, know that I have a major fascination with Erin Kellison's Shadow Series. Her shadow world continues with a new chapter, set in her Shadow World comes a new series, starting with Fire Kissed, it is set to be released July 3rd. I'm giving away a mobi copy that will pop in your inbox on the release day.

Fae Fire
It is Kaye Brand's power to wield. But outcast from her kind, she's been selling herself to the highest bidder-- – money for her survival in exchange for a magic glimpse into the flames of the future.

One of the angelic Order, Jack Bastian has no use for a female like Kaye, as provocative and unexpected as her blazing beauty. Yet he has no choice but to hire her to uncover the secrets of his sworn enemy and her former fiancé, Ferrol Grey.

War is inevitable between the defenders of the Order and the mage houses who threaten to engulf the world in Shadow. For Jack, mage-born Kaye is off limits, no matter how hot the impossible attraction between them. But in the coming darkness, beset by danger and desire, everything is about to change . . .

You haven't read anything from Erin Kellison? Well your missing out! Go to Amazon and download the second ebook of her Shadow Touch Novellas, it's free. The first in the series is only $1.49.

We want to know: Angels or Demons...who do you want?
From June 28th - July 1st, you can HOP around the blogs, comment on each and follow their rules, and be entered to win over 100 giveaways.

Each blog will have it's own giveaway, PLUS we have TWO grand prizes.

ONE Commenter from the blogs will win a KINDLE TOUCH

another Commenter will win a $60 Amazon or Barnes & Noble Gift Card!

So come around those days and do your best to win!

Remember to leave your email address in the comment OR your entry for the grand prize won 't count!

Good Luck! And get to hopping!