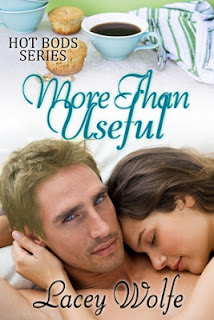 Can she settle for just a little fun?Every Tuesday and Thursday morning Adam stops by Amy's bakery for one of her delicious muffins…and a little flirting. When he finally asks her out, Amy is thrilled.
Adam informs her from the beginning that he isn't looking for anything serious. Just a little fun. Amy agrees, even though she isn't entirely sure that's what she wants.
She does her best to play it cool, but Adam is sending so many mixed signals he's confusing her, which she finds incredibly frustrating.
Adam is terrified by the feelings he's developing for Amy. It would be so much easier if he just backed away from her. Then there's his sister, who is insisting that Amy is not the right girl for him.
Will Adam be able to figure out what his heart desires before it's too late and he loses his chance at true happiness?

Review:
More Than Useful is the second in the Hot Bod Series which comes after Fool Me Once (review can be found here)

In the beginning of More Than Useful most of the scenes take place in the bakery and I adored them. The conflict and Amy's love for baking as she does her best creations when she's upset.

As the story progresses and she is out with Adam, having "fun" as he called it, my heart called out for Amy as she apparently wanted more of a life with him out of the bedroom.

More Than Useful is heart gripping, beautiful story line with characters you won't soon forget. Smoking hot scenes, with this only being the second book in the series, hop on the bandwagon as this series just gets better with each book.

Buy on Amazon, or at Beachwalk Press