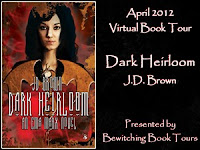 Title: Dark Heirloom
Author: J.D Brown
Author Webpage: http://authorjdbrown.com
Author Twitter: https://twitter.com/#!/AuthorJDBrown
Author Facebook: http://www.facebook.com/pages/Author-JD-Brown/100734053354525
Pages: 270
Genre: Urban Fantasy
Price: $5.95
Publisher: Muse It Up
Blurb: “You’re a vampire” is so not what Ema Marx wants to hear when she wakes from a two-day coma in a cryptic yet exquisite castle in northern Finland. Unfortunately, it explains a lot. Like why she’s able to see in the dark and walk through solid objects. What she doesn’t understand is why the other vampires expect her to have all the answers. It’s their fault she turned into one of them…right?
Jalmari’s hatred for his old-man intensifies when he’s ordered to bring that troublesome girl to their castle. He has a clan to run; there’s no time for babysitting newborn vampires no matter how they were converted to their culture. But when a two-thousand-year-old premonition threatens to take the crown and his life, Jalmari sees no other choice than to take out the catalyst, Ema Marx. Fortunately for Ema, she could also be the clan’s only savior.
The race to figure out her vampiric origins is on. And maybe she’ll get the hang of the blood-drinking gig along the way…

Today is special... for two very different reasons. One, this is the first blog tour I have participated in. Two, this book is from a debut novel by J.D. Brown, the book is Dark Heirloom.
To start out today I'm going to give you an excerpt, to get you all excited for the new book.

Excerpt:
A scream tore from my throat. The rapid slap of my sneakers against asphalt echoed through the alley. Wind ripped my hair and coat back as if trying to halt my escape. A chain link fence rose in the distance as I neared the end of the alley. Shit. I could have sworn this one opened to Clark Street.
Thud.
I froze. My heart pounded in my ears. Tears fell as I closed my eyes. Please, please, God…
His heinous laugh drowned out my ragged breath. Caught at a dead end, I had no choice but to turn and face him. He stood in the shadows, the darkness of his attire blended in with the night. Only the glow of his emerald-colored eyes gave him away.
Think, I shouted to myself. What does he want? My purse? My money? With a shaky hand, I pulled my wallet from my bag and flung it at him. He shifted his weight, dodging the wallet in one simple move. I stared like an idiot as it landed in the gutter behind him. Why is he chasing me if he doesn’t want my money? What else could he want?
He grinned, bearing a set of abnormally sharp, fluorescent-white teeth. Who the hell is this freak?He stepped toward me. My fists clenched as I stepped back. He took another step forward. My back pressed against the cold metal of the fence. Tears blurred my vision and fell as ice melted through the back of my coat. Chills rolled down my spine, sending a quiver to my lip. I swallowed the lump of panic building in my throat. “Leave me alone!”
He kept advancing, his eyes locked on my face, his gait slow with one foot in front of the other, like a cat. I shoved a trembling hand in my purse in search of my pepper spray. He snatched my wrist and yanked me to my knees. The contents of my purse spilled and scattered.
“What makes you think I want anything from you?” he sneered.
My chest heaved as I pushed myself up. From the corner of my eye, I glanced at the mouth of the alley, now behind me.
He scoffed. “You think you can run? Go ahead,mouse. Run.”
I did.
I was almost to the street when a thick shadow dropped from the sky. Two rock-solid fists shoved my chest. I fell backward. My head hit the pavement. Stars danced in the periphery of my vision as I struggled to sit up, but my limbs moved in slow motion.
Two hands, each finger adorned by a silver ring, gripped my shoulders and lifted me. My back hit something solid and cold—a brick wall. My feet dangled above the ground. He held me at eye level; his sour breath churned my stomach as his face inched closer to mine.
“I know what you’re thinking.” His voice was deep, smooth, as he rolled his R’s. “You’ve done nothing wrong. Nevertheless, once you kill one rat, you have to kill them all. Even a little mouse like yourself.”
My blood drained at the utterance of the word kill. I squirmed in his grasp. “Please, don’t hurt me.”
He clenched my jaw with one hand as his fingernails dug into my skin. I cried not from the pain, but from fear.
“Would you like to know a secret?” His hot breath caused bile to rise in my throat. “Only you disgusting rats can see our eyes glow. I’m sure you knew that already. I’m sure your mother told you the stories. I’ll bet you didn’t listen to her. I bet you thought they were just fairy tales and bad dreams, hmm?”
I had no idea what he was talking about. I concentrated on finding a way out of his grip, hoping his guard would slip while he continued his monologue.
“You know, when you find one rat, there are a dozen more in the nest.” He tightened his grasp. “Where’s your rathole, eh little mouse?”
“Let me go!” Pain manifested in every inch of my face. My jaw throbbed and my head spun. A stiff ache cut through my spine. Fear and cold shook my core. Exhaustion weighed down my struggling limbs. I just wanted it to end.
He studied my face for a moment, a frown tugged at his lips. “Very well.”
He released my jaw then reached back under his jacket. The sound of sharp metal being unsheathed pierced the night as he drew out a long silver dagger. My eyes widened at the emblems engraved on every inch of the blade and handle. I recognized them as Norse in origin. I also recognized the precise way in which he held the dagger level with my left rib cage. He’s going to stab me in the heart.

Now onto what Viari thought:

Now I just want to say a little something before I start today’s review. Yes this is a blog stop for Dark Heirloom. It was a book I choose to review. That said I give honest reviews, if I don’t like the book I will tell you that. However I adored Dark Heirloom.
This is an awesome book, simply awesome. Ema Marx wakes up a vampire and through much of the book, she doesn’t truly believe that she is indeed a vampire; though she knows she’s not completely human.
J.D Brown does a wonderful job weaving of history, science and mythology together. I felt completely pulled into the world she was weaving, I felt as if I was right next to Ema, learning right alongside her.
I was enthralled with the story has a whole, but about half way through I found that I simply could not stop, she had me on the seat of my chair, the air charged with intrigue and suspense until the climax of the very last chapter. I found the characters to be fully fleshed out, the plots were very solid. Overall it is a stunning vampire book.
The book didn’t disappoint me in the least and knowing that this is just the first book in a series fills me with joy. I will be very happy and honored to fall into the depths of her writing once more when Dark Liaison hits the shelves next year.
I give it a solid 5 stars.