Welcome to my giveaway hop, the last one didn't go so well. But this time it will be different, I made sure my comment system works! So Hunky Hero Giveaway Hop. Apparently I like my men dark. Cause really it was a toss up between Shadowman from Shadowman or Zsadist from the Black Dagger Brotherhood. Both are very much the hero, though I thought I'd go with Shadowman. Why you ask? He's the grim reaper that's why. Shadowman is one of the most feared fae, the fae of death, yes he has a scythe, it's where he gets his power.

A bit of a backstory here, he fell in love with a mortal... it's forbidden. They together produce a child. Kathleen begs for more time... just enough time to hold her daughter...he can't grant that. Kathleen dies, yes it's sad.

Years later, Shadowman has finally found where her soul was sent... hell. He builds a gate to hell to retrieve her.

I must be disturbed because that right there is sexy as hell, building a gate to hell to save his love. Wicked ain't it? Also this story has demons, angels, ghosts and other fae. This is one of my very favorite books, I've read it like 5 times. Also Shadowman is the third in the Shadow Series, though the way that she writes, they stand alone.

I do want to take just one second and say this is dark adult fantasy/supernatural.

From the back cover:

GHOSTS
They haunt the halls of the Segue Institute, terrifying the living, refusing to cross over. But one soul is driven by a very different force.

LOVE
It survives even death. And Kathleen O’Brien swore she would return to those she was forced to leave too soon.

SHADOWMAN
He broke every rule to have her in life; now he will defy the angels to find her in death.

THE GATE
Forging it is his single hope of being reunited with his beloved, but through it an abomination enters the world. Leaving a trail of blood and violence, the devil hunts her too. Pursued through realms of bright fantasy and dark reality, Kathleen is about to be taken. . .

Also I am showing off the book Trailer,


So this is how it's gonna go down. I have three Erin Kellison mobi's to give away.

Our winner will get the mobi copy of Shadowman 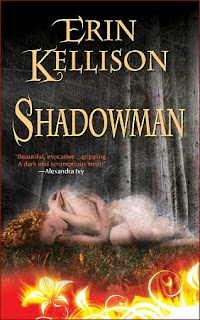 I bet your asking yourself, how do I enter?
Easy, follow the blog either through GFC, Linky or subscribe and  leave a comment, it's pretty easy.

Make sure to leave your email in the comments. I will be using random.com to pick the winners. The giveaway is open until April 22nd at 11:59 EST.

I will announce the winners April 23rd. So get to commenting!

And make sure to hop along to the next site.