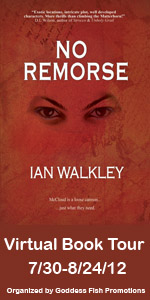 No Remorse by Ian Walkley

Two men, exiles from their respective societies, take conflicting approaches in the quest to regain their place and self-respect, and find themselves at war over a kidnapped girl.

Lee McCloud (“Mac”), a special forces soldier facing trumped-up charges of murder, is forced to work for a mysterious government outfit operating outside the law.

Khalid Yubani, cast out of Saudi Arabia for an offence against another member of the Royal family, seeks revenge through ruthless acts of evil. Engaged in the worst forms of human trafficking, Khalid buys Sophia, the daughter of Mac’s best friend, who has been kidnapped in Mexico. With time running out for Sophia, Mac enlists the help of a beautiful computer genius, a British SAS soldier and a Lebanese fixer to try to find Sophia and save her from the terrifying fate that Khalid has in store.

Although starting the quest as a man with no remorse, Mac gradually discovers a side of himself that he suppressed after witnessing the abduction of his own sister years before.
Dodging assassins, corrupt generals, evil medicos, Mossad agents, corrupt bureaucrats, and sharks, Mac ignores the order to stay out of trouble and follows Sophia’s trail from Mexico to Paris, London and Dubai, and the island of Andaran, where Khalid and his henchmen are waiting…

After a long flight, the aircraft landed in the dark, on a brightly lit runway, and armed men hustled them onto another plane, this time a smaller, fat-bodied one with propellers. The noise was deafening, and nobody spoke for the three hours or so it took to reach the next stop. Here, they were pushed into a truck and driven through a dirty, half-destroyed city that looked like it had been through a war. Sophia thought she could hear distant gunshots as they drove. Danni agreed that they must be somewhere in Africa. The air was steamy and clouds of mosquitoes inside the truck feasted on the captives in the dawn humidity. Finally, they arrived at a port, where they were joined by another group of thirteen captive teenagers from European countries. Armed soldiers supervised their transfer to a motorboat that took them out on a slow rolling ocean and tied up alongside an enormous vessel that looked like a cruise ship. A gold plate halfway up the side displayed the name PRINCESS ALIYA. Way above them, Sophia could see several men with skin the color of burnt caramel, dressed in flowing white robes. The knot in her stomach tightened. Maybe they had been sold to an Arab sheik’s harem?

Crewmen from the vessel herded the captives below decks and into cells that held four people on bunk beds, with a shared toilet and washbasin. Sophia and Danni were put in a cell with Erika and a tiny eight-year-old named Carmel, who'd been separated from her brother Gregory and sobbed quietly in Sophia's arms.

I gave Ian the choice of the topic and he chose his two main characters, Lee McCloud and Tally Francis.
An important part of many stories is the sexual tension in the relationship between the two main characters. In many novels it is the key to maintaining reader interest. In thrillers, which tend to rely on action and fast-paced suspense to maintain interest, there is a risk that too much dreaming about one’s feelings (like in a romance, such as the way Anastasia thinks about Christian Grey, for example) would slow the story too much. In No Remorse, the sex is there, but I’ve tried not to slow the pace.

In No Remorse, Lee McCloud (Mac) has a lack of trust towards attractive women, because his fiancée left him for his brother four weeks before their wedding. The other main character, Tally Francis, has recently finished up a relationship with an abusive soldier. That background sets the scene for some fiery confrontations when they are introduced and told they have to work with each other. I deliberately tried to model their relationship on the TV series Moonlighting, and the film Mr & Mrs Smith. A love-hate thing, with snappy dialogue and the constant threat of a major blowup.

“If you are a lover of books with plenty of page turning action, a charismatic hero and female characters who are as strong and dedicated as their male counterparts this is a book for you.” (Reviewer comment)

Mac is a special operations soldier—an elite commando, well-trained and confident in his skills. When his best friend’s daughter is kidnapped in Mexico he feels not only loyalty to his friend, but recalls witnessing his own sister abducted when he was fourteen. With several buddies, he attempts a rescue outside Tijuana that ends badly, and is forced to leave the army to work for a secret agency. His supervisor is an attractive female computer genius with no experience in the field, so naturally he resents this.

But Mac can’t afford to be too rebellious, because he needs the agency’s resources to help him continue the search for the kidnapped girl, Sophia. Tally also has a few skeletons in her past, which I won’t reveal here. But she is more capable than she lets on to Mac, and she quickly gets a chance to demonstrate her skills.

Many novels featuring soldiers or cops make the hero too powerful, too smart, and don’t have him/her make the sort of mistakes people make in real life. I wanted my main characters to be flawed enough to be out of their depth at times, to make the achievement of their goal that much more difficult. Further, I wanted them to have conflicting goals to a degree, such that each was keeping information from the other about what was really going on. This, of course, increases the level of distrust, which aggravates the conflict between them. I think it is a lot of fun to read, even though there is some serious subject matter involved.

In terms of character arc, Mac gradually realizes that he has to give up the chips on his shoulder from past failures and problems with trust. Like most men, Mac is at times is pig headed. But he is also fundamentally kind, a protector, with a strong sense of justice. In that sense, an archetypal hero.

Events in the story also result in Tally changing her attitudes about soldiers, and about the future. Being more of a detail person than Mac, she manages to save him from making several bad mistakes. Tally too has the qualities of a heroine.

But No Remorse is a thriller at the end of the day, so there is always a chance they won’t succeed, that someone will stab them in the back. You’ll have to read the book to find out what happens, but I’ll leave you with another reviewer comment:

“A roller-coaster ride of adventure, danger, international intrigue and conflict, then adds a surprising twist at the end.”

One lucky commenter has the chance to win a $50 GC to Barnes & Noble.

Ian Walkley has had a career in social and market research, and has been writing novels, short stories, travel articles and copywriting since 2008. He has co-authored two publications on small business and his first novel, No Remorse, was published in 2012. Ian's screenplay "Deniable Justice" placed fourth in the Writer’s Digest 2011 Competition for best screenplay. Ian has travelled extensively and researched his subject, and brings a knowledge of location and technical detail to the exotic settings and big screen thrills. Ian lives in Brisbane with his wife and three children.
Website       Twitter      Facebook      Goodreads