Cover Reveal: Surrendering To The Alpha by Lia Davis 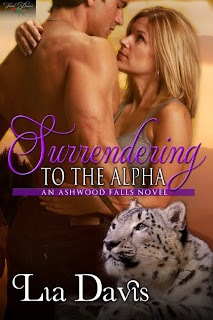 Surrendering to the Alpha
Ashwood Falls #3
By Lia Davis

Tag Line: She's given up hope of peace, yet the Alpha's touch offers promises too hard to run from.

Ashwood Falls’ leopard Alpha, Keegan Andrews holds onto the pain of his deceased mate as his own personal hell—a reminder that not all things are what they seem. The Pack Scribe, Addyson Lewis is no exception. She’s intrigued him like no other since the day she stumbled into Ashwood territory about twenty-five years ago. When he discovers that just being near her calms the storm inside him, he can’t stay away even if it means exposing her to the evil she tried to escape.

Over a hundred years of psychological torture at the hands of the rogue Onyx Pack has left Addyson with no memories of her life before captivity and with the inability to control her psychometric nature. Anything or anyone she touches sends her into their darkest past and secrets, causing her pain she wouldn’t wish on anyone. Without the ability to control it, she’s forced to deny her leopard the connection she craves from the Pack that welcomed her with love and without judgment. That is, until the day Keegan involuntarily touches her bare skin and she finds the peace she’d craved for far too long.