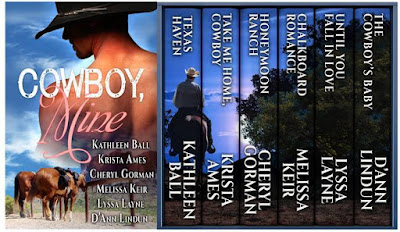 Chalkboard Romance by Melissa Keir
Part of Cowboy, Mine... He'll Leave You Breathless...

Will a One Night Stand prove to be their disaster or their salvation?

Lauren Walsh, a divorcee and elementary teacher, wants to feel sexy again after her ex tosses her aside for a younger woman. Her best friend encourages her to sign up for The Playhouse--a renowned dating agency. Forced to stay away from his young son, Mac Thomas lost the ability to trust. After the death of his wife, he returned to care for his son but his sister wants more for him. She sets him up with The Playhouse.

Passion ignites but Mac’s a parent of one of Lauren’s students. A teacher and a parent dating could cost Lauren her job and her chance at happiness. Will Mac be able to convince the school and Lauren, that love is the most important thing?

She allowed her friend to drag her back toward the dressing rooms while poor Cherri followed with gigantic piles of clothing and undergarments. Thank goodness they were currently the only customers in the place, there was no way she would parade in front of others in what they will make her try on.

After a while she had to admit the two women had a certain high-class taste for suggestive yet sensual clothing. Ten or more outfits later, her nervousness faded. She was starting to look at this as an adventure. Mel as well as Cherri voiced their opinions on different outfits. Some of their comments shocking her, while others had her laughing outright. Quite a few times, Melanie needed to rush in to help Lauren with the intricacies of some of the attire. One dress happened to be mostly straps which strategically covered only the naughty bits.

“A no way on this one,” she called out, “I want my body to look sexy, not red from all the rubbing.”

A variety of little black dresses slipped on and off her body in a matter of moments. Flaws with each of them. “I don’t know black isn’t the best color for me. It makes me look washed-out. Let’s try some other colors.”

Cherri quickly selected more dresses, bustiers, thigh-high stockings, and barely-there thongs. Trying each on, Lauren felt like a live Barbie doll. They’d pick out the clothes. She’d try them on then parade for their approval. None of the outfits screamed the one yet.

A blue jersey dress with a sweeping hemline caught Lauren’s gaze. “If I need help getting into these here, who’s going to help me get dressed in Chicago?” Lauren shouted. She pulled the blue dress over her head. The fabric hugged her figure. The uneven hemline made her legs look even longer. Hmm. This one isn’t bad. Lauren twirled in the mirror to get the full effect. She ran her hands over her waist then down her hips, feeling the silky fabric under her hands. The dress hugged her curves, making her feel sexy. She opened the curtain with a flourish.

“Your date will be helping you out of that dress! Damn girl. You look so good. The neckline shows off your girls and the blue makes your eyes seem bigger, too. This dress is a keeper. This guy is definitely going to want to strip you and eat you alive when he sees you.”

The pile of clothes to try on dwindled down to nothing while the pile of keepers grew exponentially. The black dresses lay discarded along with the strap number. The corsets and bustiers—also no-gos. Those outfits made her feel like a dominatrix—way outside her comfort zone. The black widow corset she’d tried on only made Cherri and Melanie laugh before suggesting they buy her a whip.

Melissa Keir has always wanted to be an author when she wasn’t hoping for a career as a race car driver. Her love of books was instilled by her mother and grandparents who were avid readers. She’d often sneak books away from them so that she could fantasize about those strong alpha males and plucky heroines. In middle school and high school, Melissa used to write sappy love poems and shared them with her friends and still has those poems today! In college her writing changed to sarcastic musings on life as well as poems with a modern twist on fairy tales and won awards for her writing. You can find many of these musings along with her latest releases on her website and blog.

As a writer, Melissa likes to keep current on topics of interest in the world of writing. She’s a member of the Romance Writers of America, Mid-Michigan RWA Chapter, and EPIC. She is always interested in improving her writing through classes and seminars.

Melissa doesn’t believe in down time. She’s always keeping busy. Melissa is a wife and mother, an elementary school teacher, a book reviewer, an editor for a publishing company as well as an author. Her home blends two families and is a lot like the Brady Bunch, without Alice- a large grocery bill, tons of dirty dishes and a mound of laundry. She loves to write stories that feature happy endings and is often seen plotting her next story.

Other stories in the boxset are....

Can love shine through the clouds of treachery and misunderstanding?

Advertising for a wife seems like the answer to all of Burke Dawson's problems. He wants a wife and kids without emotional attachments, but he has no idea how much havoc one woman can cause.

Annie Douglas has her heart set on her hunky cowboy's love and she isn't about to stop until she gets it.

When tragedy strikes, will building tension and pride destroy a growing attraction or show them the way home?

Ally Kincaid returns to Rock Creek, Wyoming, to see her father after a two year absence. Anticipating a quiet family reunion, she finds herself butting heads with Matt Gentry—her father’s foreman—instead. The man’s arrogance and sexy drawl push all her buttons, making her wonder what he’s hiding beneath his cowboy swagger.

When tragedy strikes, will building tension and pride destroy their growing attraction or show them the way home?


Can two reluctant partners ride off into their own blissful sunset on Honeymoon Ranch?

When wedding planner, Summer Conroy, discovers she has inherited half of Silver Creek Ranch, she is stunned to learn the other half is owned by sexy cowboy, Bryce Jericho. Her idea of turning the ranch

into an exclusive wedding and honeymoon destination is met with a wall of resistance from Bryce who doesn’t want his ranch ruined with a bunch of wedding nonsense. He is determined to conceal his vulnerable heart that beats in fear of being betrayed again. Will this woman with dreams of happily-ever-after in her eyes transform his fear into love everlasting?


Until You Fall in Love by Lyssa Layne


Can a longtime friendship suddenly blossom into love?

When Abram's father suffers a heart attack, it's Abram's turn to depend on Jordan, finally seeing her as the woman she's become and not the little girl he grew up with.

Will they risk their friendship for a chance at love?

The Cowboy’s Baby by D’Ann Lindun

Cat wanted to keep her baby: Tanner insisted she give it up...can they find common ground seventeen years later?

Cat O’Brien left her heart in Granite, Colorado, seventeen years ago—her first love, Tanner Burke, and the baby girl she gave birth to at sixteen. Suddenly, both Tanner’s high school sweetheart and the teenage daughter they gave up for adoption are back in his life.

Cat is adamant their daughter keep her baby; Tanner isn’t as sure. Just like seventeen years before, he and Cat are butting heads over the fate of an unborn child.
at 6:51 AM