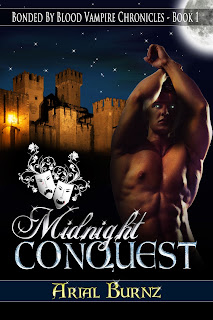 Masked in a Gypsy guise, Broderick MacDougal hides his vampiric identity while seeking to destroy the man who slaughtered his family. When an old Clan rival ensnares Broderick in a trap using an enticing widow, he is compelled to discover if she is bait or an accomplice, and the cinnamon-haired beauty is his next conquest.

Widow of an abusive husband, Davina Stewart-Russell clings to the only image that gave her strength during those dark times—the Gypsy rogue who stole her heart as a youth. After nine years, she is finally face-to-face with him again, but reality clashes with fantasy as she is confronted with Broderick’s passionate pursuit.

When Davina’s past returns to haunt her, Broderick is forced to reveal a dark secret worse than anything Davina thought possible. The challenge before them has fatal risks and neither of them is prepared for the sacrifices expected for the sake of eternal love. 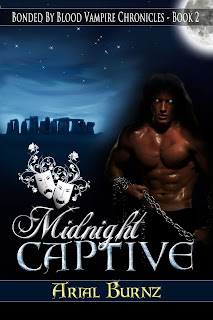 Cailin MacDougal has lived a dangerous life being the adopted daughter of vampire Broderick "Rick" MacDougal, so she had no choice but to learn to fight in order to protect herself. However, such behavior is hardly desirable in a dutiful wife who's supposed to embroider and run a household. This aggressive side of her behavior should be easy enough to hide from her betrothed...shouldn't it?

After being away at fencing school for seven years, James Knightly has returned as a master swordsman, ready to captain his own ship and finally wed his childhood sweetheart, Cailin MacDougal. What he finds waiting for him is a dagger-toting hellion for a bride, an immortal father-in-law, and an enemy bent on extracting revenge by threatening the family James holds most dear--the MacDougals.

Broderick MacDougal is lured away from his family with the promise of-at last-learning a way to protect those he loves from his clan enemy, Angus Campbell. Broderick knows he's headed for a trap, but the bait is too tempting to resist...and he unravels the beginning of a prophecy that will lead to redemption for all vampires. The cost of such redemption, though, may be the very soul of the woman he would die for...his wife, Davina.

With a groan, he dashed around the table, and before she could gather her wits, he pulled her to her feet, wrapping her in his embrace and crushing her arms between them. Davina’s hands upon his chest spread warmth over his body. The wild thumping of his heart beneath her palms matched her own heart’s cadence, pounding in his ears. Davina stared up at him with parted lips, full and tempting, begging to be tasted, and his mouth descended upon hers. With a dexterity that surprised him, she dodged him.

Amusement played havoc with his features and he eased the tension of his embrace just enough to allow Davina some breathing room. His voice purred, “Stop? You are ripe and ready, lass. What say we indulge in each other in a more private atmosphere?”

Davina stepped out of his embrace and cracked her hand against his cheek.

“What in—” Broderick’s brow scrunched in confusion, and then smoothed as he tipped his head back and hearty laughter poured out of his mouth, his fists planted on his hips. Oh, I like her!

Peeking Under the Kilt
A special thank you to Viari Rose for having me as a guest today. So happy to be here!

When asked what inspired me to write my Bonded By Blood Vampire Chronicles, I have to take a trip back about twenty…er, um…*cough, cough*…many years. Back in the ‘90s those days, vampire romance was not a popular genre. As a matter of fact, there were only a few books on the shelves and those were hard to come by.

Each one of the PNR books were—and many still are—contemporary and told the love story of the vampire after he’d lived hundreds of years and had grown weary of immortality. They also had the same type of vampire hero who moped around with the back of his hand to his forehead, “Oh, woe is me, my existence as a vampire! Who will ever love a terrible creature such as I?” In addition to their wet-blank attitude, they were thin, pale and either brunette or blonde. I wanted to write about the vampire hero I wanted to read about: Enter Broderick “Rick” MacDougal. RAWR!

I did an inventory of everything the other vampire heroes were and I made my main character the exact opposite: Scottish, redhead, six-foot-three, a womanizer who loves immortality, travels with the Gypsies and is built like Arnold Schwarzenegger (well…Arnie was pretty popular back then, but by today’s standards, you could say Broderick’s built like Dwayne “The Rock” Johnson).

In addition to making Rick larger than life, I wanted to tell his story from the beginning, so the six-book series is a collection PNRs with an historical backdrop, following Broderick’s quest for revenge and finding his soul mate through the centuries. The overarching storyline across the books features a prophecy that leads to the redemption for all vampires and the series will end in 21st Century Los Angeles.

Midnight Conquest (Book 1) starts in 1486 when Rick first becomes a vampire. As with any series, the characters need to start in a place where they can grow and develop through the overarching story of all the books. Broderick is definitely a rogue and Davina, my heroine, is indeed a woman of her time, subject to the control of the men in her life. She also has a toddler daughter named Cailin. But Rick and Davina are well-suited as a couple and even save each other from their self-destructive behavior.

Midnight Captive (Book 2) is in 1531, seventeen years after the end of Book 1, and is Cailin’s story. I fell in love with her as a toddler and she begged to have her story told. But in thinking about what her life would have been like being the adopted daughter of a vampire and caught in the middle of an ancient clan war, she was NOT going to be a woman of her time and completely opposite of her mother. Ergo why Cailin is written as a strong-willed, dagger-toting hellion who gets herself into trouble over the man she loves, James Knightly. Broderick and Davina take a backseat in this story, but I further establish their soul-mate connection and set the stage for the rest of the series, revealing the origin of my vampire lore.

I can’t talk a lot about Midnight Hunt (Book 3) without giving too much away, but I can say there’s a witch heroine, werewolves, and the storyline of the prophecy continues to advance. This story is set in Germany, 1636, just at the tail end of the witch trials that swept across Europe during the Thirty Year’s War. Having a background in both Catholicism and Wicca motivated me to pick the tumultuous setting, and my love of Germany drove the location.

I have one heck of a ride planned for the rest of the series – Norse shapeshifting pirates in the 1700s (Midnight Eclipse – Book 4), Jack the Ripper (Midnight Savior – Book 5) and the culmination of all the clues and storylines in Midnight Deliverer – Book 6. If the series goes as well as I’m hoping, there will be contemporary spin-offs from Book 6 and I have two novels planned as side-stories from Book 4, telling the love stories of the heroine’s brothers – a M/F romance and M/M romance, both set in the 1770s.

What about you? What’s inspired you to write your current work in progress (WIP), if you’re a writer? If you’re a reader, what do you love about the behind-the-scenes information…aka peeking under the kilt…on some of your favorite books? Do accounts of how novels were created help you understand the stories better? Perhaps motivate you to want to read them now that you know something a little more personal about how they were conceived? I’d love to read your comments. I AND my characters will be available for questions. Broderick and Angus have been known to make appearances. But be forewarned: They’re rogues!

Thanks again for having me as a guest!!

Arial Burnz has been an avid reader of both paranormal and fantasy fiction for over thirty years. With bedtime stories filled with unicorns, hobbits, dragons and elves, she had no choice but to craft her own tales, penning to life the many magical creatures roaming her mind and dreams. And with a romantic husband who's taught her the meaning of true love, she's helpless to weave romance into her tales. Now she shares them with the world. Arial Burnz lives in Rancho Cucamonga, California, with her husband (a.k.a. her romance novel hero)—who is also a descendent of Clan MacDougal—along with their dog and two cats.

Check out the images of her characters over at Pinterest

So drop by Goddess Fish, and grab another tour host spot and comment, the more you comment the greater your chances of winning!
at 1:00 AM